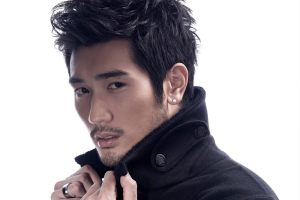 In our very first haiku exchange, model and actor Godfrey Gao (The Mortal Instruments: City of Bones) gamely responds to our lyrical inquiries through Japanese haiku.

In Asian TV dramas, the male protagonist is often a young, arrogant, rich kid who’s about to have his world turned upside down by the wholesome, down-to-earth female who finally makes him want to be a better person. To set this up, there’s often an obligatory scene where a crowd of girls lunges themselves at the leading man, causing your average feminist viewer to roll her eyes.

But when Godfrey Gao, dressed in an all-white suit, makes girls’ hearts go aflutter in the first episode of the 2010 Taiwanese drama Volleyball Lover, it seems quite realistic. Or perhaps, your eyes are too stunned to roll.

It doesn’t hurt that Gao’s athletic character, Bai Qian Rui, is not arrogant, but in fact kind of silly. In order to cheer up his best friend, he crouches his entire 6-foot-4-inch frame low to the ground and jumps up and down like a gorilla. “I think that character is closest to my personality,” says the Taiwanese- Malaysian Canadian, “because I can be quite goofy sometimes.”

Born in Taipei, Gao moved to Vancouver at age 9 and immediately noticed cultural differences. “I remember [Canadian] girls in school greeting friends or strangers with hugs, some- times even [taking] a running jump to give a hug,” says Gao, “whereas in Taiwan, girls were mostly shy, and if boys came up to talk to them, they’d run away and giggle from a healthy distance.”

As a child, Gao idolized Michael Jordan, and it was his dream to play basketball in the NBA. A skinny, lanky kid, Gao had his growth spurt between 9th and 10th grades, a period he remembers clearly because it resulted in him dunking a basketball for the first time. He still plays pick-up basketball weekly, and if he hadn’t become a model and actor, he says he would have loved to pursue a career in sports. “Perhaps I might’ve become Jeremy Lin!” he jokes.

At first, modeling and acting seemed out of reach. “Honestly, I didn’t think it would happen because clothing-wise, nothing fits me in Asia,” he says. But then he earned his first acting job in 2006 in the Taiwanese drama The Kid from Heaven, in which he plays an American coming back to Taiwan to run a business. Likewise, Gao had just returned to Taiwan from Canada to give acting a shot.

While he worked hard to perfect his craft, Gao jokes that it was his facial hair that changed the course of his career. “I had a long summer vacation back in Vancouver, and for a while, I just didn’t shave,” remembers Gao. “When I returned to shoot another TV drama in Taiwan, my manager and the producers liked my facial hair and thought I looked more masculine. That’s when I shot Wanna Be a Tough Guy, where I played Tiger, and that image stuck. It was definitely a turning point.”

By 2011, he was not only a household name in Taiwan, but he was also declared the “world’s first Asian male supermodel” by The Guardian after being named the new face of Louis Vuitton — the first Asian model for the world’s most valuable luxury brand.

In another first, 2013 brought Gao’s first English-language role as the Indonesian half-demon warlock Magnus Bane in the Hollywood adaptation of The Mortal Instruments: City of Bones. On her Tumblr, Cassandra Clare, the author of the original young adult fantasy novels, wrote that after an exhaustive search through many hot Asian men, she’s confident that “our Magnus may be … THE HOTTEST MAN IN THE WORLD.”

Expect a “warlock for the ages,” says Gao, whose character has a penchant for sparkly eyeliner. “It was magnificent! It was the first time I had glitter and nail polish applied on me.” The only downside, he recalls, was “the Magnus party scene where I was ‘sans pants’ in 0 to 3 degree Celsius weather.”

Godfrey Gao in glittery liner and without pants? “Expect a lot of fun,” says Gao. Indeed. 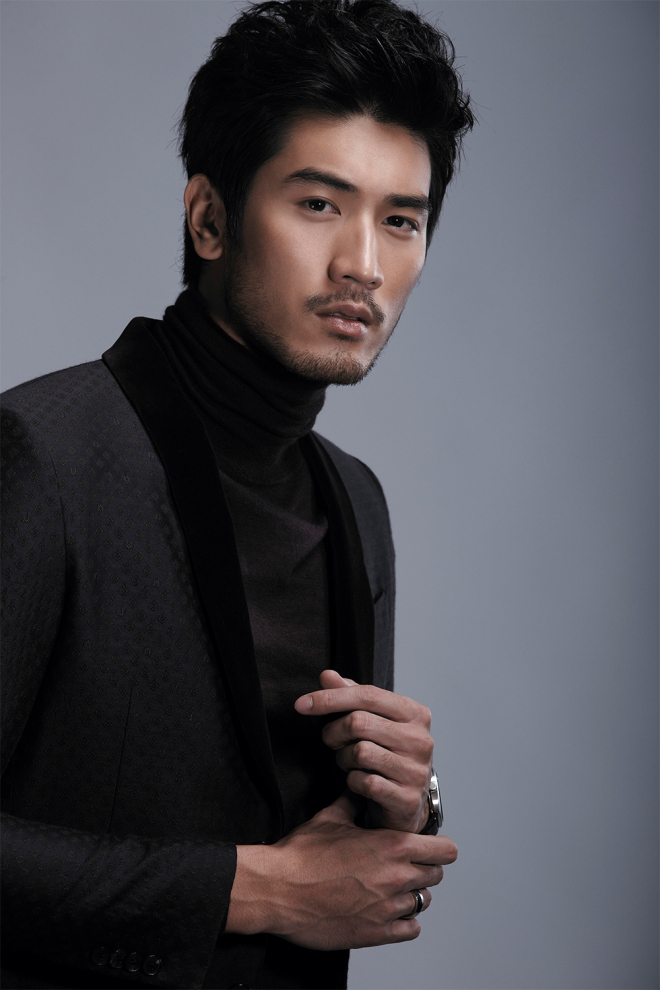 How often do fans
Faint from Godfrey’s smile (or wink)
Be honest, OK?

Godfrey:
People think I am
Sexy; Flattering, its true
But I’m just bashful.

Striving for beauty
Best regimen for Godfrey
Summed up in haiku?

Godfrey:
Sweating on “THE” court,
B-ball is my game. Keeps my
Body in good shape.