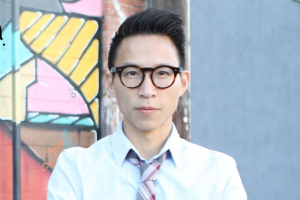 The latest hottie in our insightfully mediocre poetry series knows how to rock the white button-down shirt, skinny tie and khakis. It’s the dreamy, bespectacled Chris Dinh, who has captured hearts of YouTube fans everywhere as a writer and actor for the popular Asian American channel Wong Fu Productions.

Known for their romantic stories, soft lighting and their “Nice Guy” brand, Wong Fu recently released their first feature film, Everything Before Us, written by Dinh. Dinh also wrote and stars in Crush the Skull, the horror/comedy film about burglars versus serial killers, which won the Nightfall award at the 2015 Los Angeles Film Festival.

Can this ultimate nice guy transform into a burglar-hating serial killer that crushes his own skull with his bare hands? (Disclaimer: not what the movie is actually about.) Or does this photo show that even when he’s being bad, he’s really just being bad at being bad?

So this “nice guy” thing …
Wouldn’t you rather be bad
And make it look good?

Chris:
I’m quite the bad boy
Bad at dancing, bad at math
None of it looks good.

Tell her she’s perfect
Just the way she is, or calm
down screaming fangirl?

Chris:
Best to calm down first.
When she sees I’m not Wes Chan,
awkwardness follows.

Do you ever hum
“I’m bringing sexy back (yeah)”
when doing good deeds?

Chris:
I hum it all day.
A reminder to all. NICE
is the new SEXY.

This article was originally published in the Summer 2015 issue of Audrey Magazine.