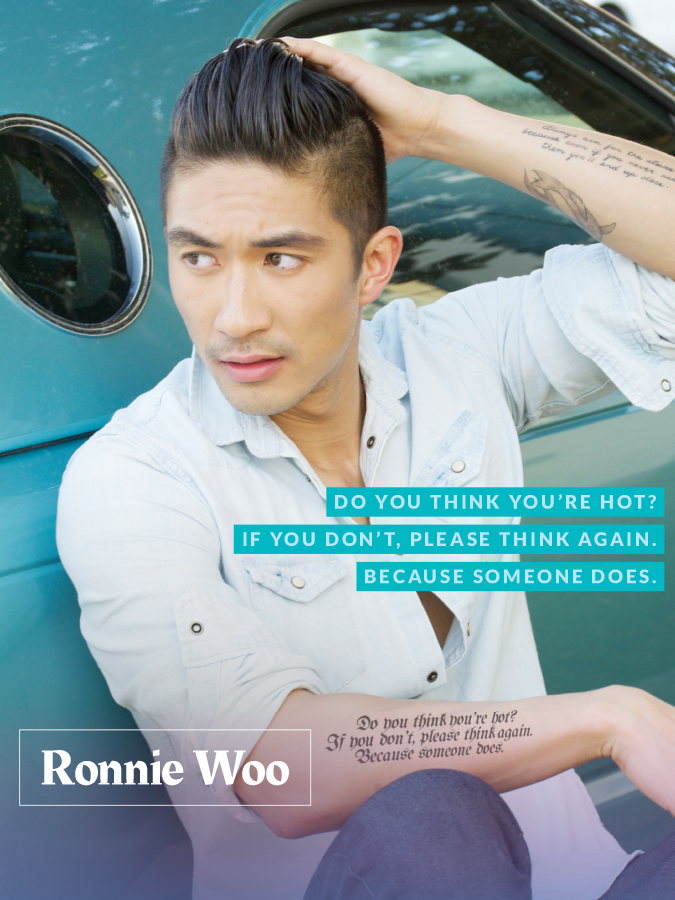 Hottie Bio: This delicious chef is most known for hosting LOGO’s cooking show Food to Get You Laid, but he’s also one of the experts on Home Made Simple on the OWN Network, which means your mother will love him too.

Ronnie Woo is an accomplished professional chef and culinary personality celebrated by his fans and peers alike for his infectious personality, knowledge on dating & relationships, and creative perspective on familiar flavors and dishes encompassing cuisines from around the world.

In 2011, Ronnie completed a culinary program in association with the Northwest Culinary Academy of Vancouver while simultaneously creating his food blog, The Delicious Cook. Within a handful of months, Ronnie began receiving requests for dinner parties and larger events, and so began his career as a private chef. Ronnie’s unique mix of charm and charisma, professionalism and culinary skill has made him one of the most highly regarded private chefs in Los Angeles.
Ronnie holds a Masters in Marriage and Family Therapy as well as a Masters in Business Administration. His education significantly bolstered his business acumen while also enhancing his ability to connect with others. In addition, Ronnie’s experience as a model for Wilhelmina and Ford provided him an early glimpse into the inner workings of the entertainment industry.

Chef Ronnie has been sponsored by numerous companies, including Fiat, Pompeian, Tobasco, Smithfield, and Chosen Foods, and has helped represent their brands across multiple media outlets. Moreover, Ronnie has traveled extensively around the world acquiring new techniques and recipe ideas from both his personal experiences and the chefs with whom he’s worked. These experiences continue to influence his culinary creations and cooking style on a daily basis

Ronnie’s culinary creativity and intense knowledge of food, relationships, pop culture, and entertainment make him a valuable asset to the world of culinary entertainment and food presenters. Ronnie has an ever-growing list of high-profile clients, which includes Jessica Alba, Charlie Sheen, Kathy Griffin, Holly Robinson Peete, Dita Von Teese, Nancy O’Dell, Vanna White, and Gilles Marini. His brand new cooking & relationship show, Food To Get You Laid, just finished airing it’s first season on the LOGO Network. In addition, he has made other appearances on numerous shows, including FABLife, Home & Family, and Home Made Simple on the OWN Network and is a regular contributor to Good Day LA. Ronnie was also chosen to be the featured chef in Sony’s The Talented Project. He has appeared in US Weekly, BELLO Magazine, Angeleno Magazine and LA Weekly, along with countless online publications as well, including HuffingtonPost.com & Out.com.

Not only is Ronnie a talented chef with a unique educational background, his made-for-TV looks and big personality make him a valuable asset to media outlets and a wide array of brands. Ronnie’s modern take on food coupled with his background in psychology has helped him capture audiences from all demographics around the world, as evidenced by his ever-growing followers across all social media channels.